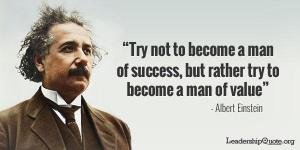 Albert Einstein put it well: being a person of success is not the same as being a person of value.  In leading one of our organizations through a decade of growth, my personal definition of leadership success has become clearer thru our focus on values.  I now see success as the results we receive when exemplifying our core values in word, thought, and deed.

Bob Chapman, CEO of Barry Whemiller is a prominent influencer of my thoughts on leadership success.  He has an excellent video on successful leadership.  I recommend watching it to better understand the rest of what I write.

Almost 4 years ago, I began a journey to lead our management team towards a healthier culture.  It has been a difficult journey.  Moments of what appeared to be success quickly drowned in the swift currents of failure.  In early 2013, I recognized that success is based less on what happens inside of an organization.  It is more about what happens outside of an organization.  As John Maxwell writes “Leadership is influence”.  Since 2013, we have watched our organization’s influence reach far outside of what we do at work each day.

Recently several individuals from the front lines of our team shared with me how being a part of our organization has helped them be a better friend, a better father, a better husband, a better leader, and a better person.  They shared how becoming an organization that lives out our core values has reached into the homes of our clients and our team members.  For me, there is nothing that will ever happen in our organization that will make us more successful than this. Success dwells within the influence we have on others, and the value we help them to see in themselves.

Becoming an organization of success is living out your core values.  That can sound like a daunting task or maybe some might say a worthless endeavour.  I will say that yes it has been daunting at times, but every drop of blood, sweat, and tears has been worth it.  Here are just a few ways that I have seen success through the lens of our organization’s core values:

As Albert Einstein reminded us, Let us pursue becoming men and women of value as we humbly lead towards success.  May our success always be producing richer relationships that spur us on to build better communities!

Learn to lead, and lead to learn.
-Winston